Showing posts from 2009
Show all

Another Visit to the Bark Park 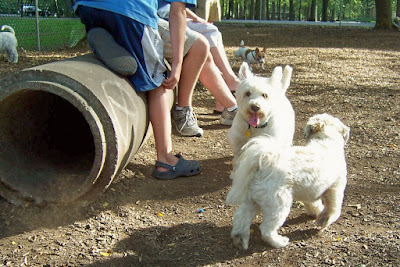 Well, summer's over and we made lots of visits to the Bark Park this year, and made lots of new doggie friends there.
Keli seems to be particularly fond of the boys she meets at the park.

Penny makes friends with just about everyone. 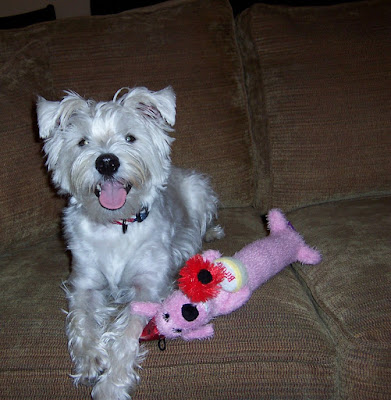 It's my 2nd birthday and we're playing with a new Happy Birthday loofa dog. Later, we're gonna have zucchini pupcakes, 'cuz those are my favorites.

Yesterday, we went to the Bark Park and you know what? It was like it was Westie day -- we met one Westie who was leaving when we were just getting there, and another Westie was already at the park! We had so much fun playing even though I'm only half-Westie. We stayed for like an hour and even Keli was playing with the other doggies. It was really fun, but we didn't get no pictures 'cuz the batteries were too low on the camera.

Instead, here's a picture of a plate from Donna's collection -- it's for a first birthday, and it's not really a Westie or a Schnauzer, but I still like it.

Every Westie in the Pool! 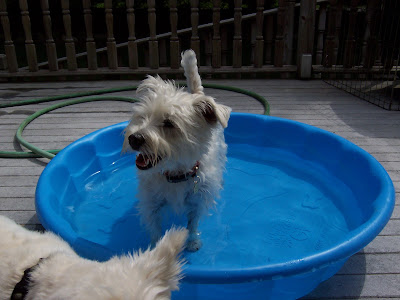 Last summer, it was hot dog day in June when we tried to get out the old pool to cool off, but it had a hole in it and we had to wait a day to blow up another pool before we could have our first Westie pool party.

This year, we didn't have to wait, 'cuz we got a new pool from PetSmart in May. It's a little smaller than the old pool, but we think it's just right for us. We're ready for the heat this year!
Penny jumps in first, but Keli isn't quite sure the water is warm enough yet:

Come on in Keli! We can both fit in here:

This is actually quite nice, once you get used to it: 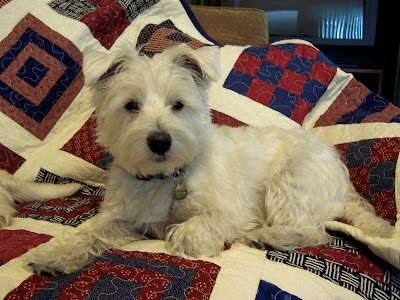 My turn: Penny, the patriotic pup:


Thanks for visiting our blog,
Penny 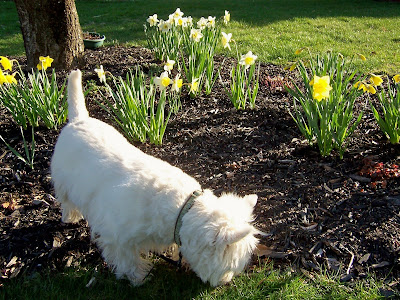 A few weeks ago we decided to inspect the daffodils: 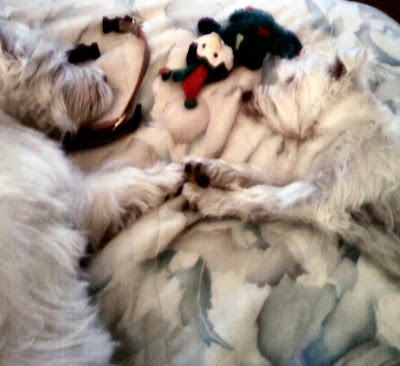 This would never happen while they are awake:
Looks almost like they are holding hands in their sleep, doesn't it?
Keli (left) and Penny (right) were very tired yesterday after having had a nice long walk in the afternoon. They both decided to follow me upstairs and fell asleep on our bed while watching TV. Normally, they would never sleep this close to each other and I don't think they even realized their paws were touching, they both were sleeping so soundly.

Excuse the blurriness - photo was taken with the camera on my cell phone, then cropped and edited.
Post a Comment
Read more 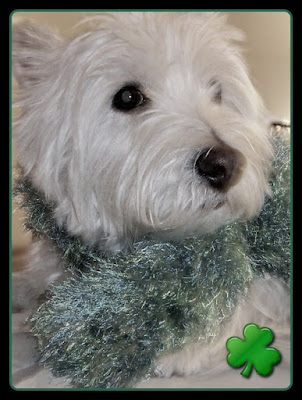 Keli, the serene princess, on her recent birthday
Penny
We didn't pose for new pictures for St. Patrick's day, so Donna recycled some of our old favorites and gave them a green, shamrocky twist.
Here's a couple of the St. Patrick's Day Westie decorations she put up:

I wonder if we'll get to try the corned beef this year? I think we'll probably get some of the carrots and potatoes.
Thanks for looking at our blog,
Keli 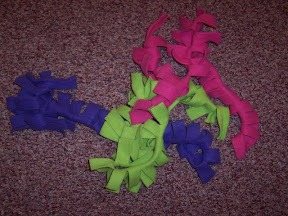 Can you guess what this is?
Or used to be before Penny finished deconstructing it?
scroll down for more

It used to be one of these:


The good thing about this destruction is that we think we can make a ball of our own from fleece scraps. And maybe we can make one with a squeaker inside, too, that isn't so easy for these Westies to rip apart. Hmmm . . . .

We could try putting this one back together, too, but Penny is having too much fun playing with the spoils.
Post a Comment
Read more 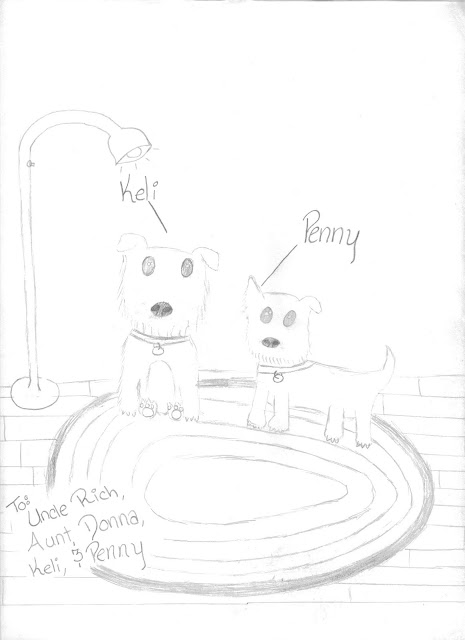 We had visitors last week -- Elora, Jenna and Jack came with their mom, Laurie.

It was after lunch when they arrived and they brought some chocolate brownies, but we weren't allowed to eat them ('cuz chocolate is bad for doggies) but all the people ate them and said they were delicious. Me and Keli had biscuits and lamb jerky treats instead.

Jenna drew this picture of me and Keli from her memory; can you believe it?

Doesn't it look almost just like us? We even have an oval rug just like that in the dining room!
While they were here we went for a walk, and we played downstairs and I showed everyone how I roll upside down inside my tunnel and pushed my tent over and over. I can be very entertaining.

Keli jumped up on the couch next to Jack, and he wasn't even afraid of her:

Then after a couple hours it was time for everyone to go home and after a few minutes me and Keli were really tired so we made Donna take a nap with us on the couch: 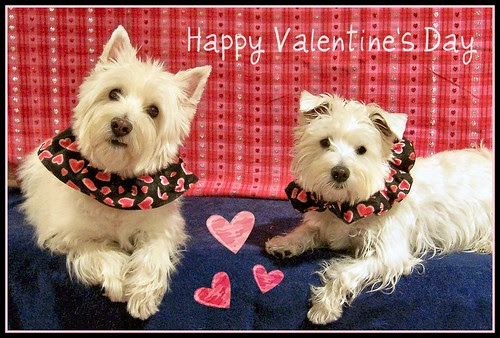 There is a slideshow embedded below:

By Donna SewAmazin - February 01, 2009
We have a new video uploaded at our SewAmazin YouTube Channel; watch it below or click on the link to watch us play hide and seek: 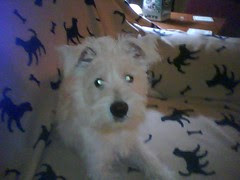 This coming Saturday marks twelve months from the day
Penny first came to her forever home:


After we brought Keli home in May 2002, I always wanted to have a second Westie -- an "heir and a spare" to our first Westie girl, Wyndi. Keli had come from a breeder because at the time I was still missing Wyndi and wanted a regular Westie (not a mixed breed) for the "heir". The "spare" could be a rescued Westie mix sometime later on down the road.

After a year or two I reminded Rich about getting our second Westie and we both agreed it would be nice, but were we really ready for all the extra work that a second dog required? Transitioning from a senior dog to a baby puppy had been stressful; did we really want to go through puppyhood again?

So each spring I'd search Petfinder.com for Westies in our area -- usually a few months after Christmas, there were dozens of listings for young dogs of all breeds. Every now and then there would be a l…
1 comment
Read more

Our Feedburner feed has migrated to Google

By Donna SewAmazin - January 18, 2009
As a result of Feedburner being integrated into Google, we've migrated our feeds over to Google, and everything appears to have successfully transferred.

If you subscribe to either our Keli's Korner or SewAmazin blog feeds through a reader such as Google Reader or Bloglines, the feed address is slightly different now.

I don't think email subscribers will be affected; consider this posting a test of the email delivery under the new system. Keli's Introduction is long overdue; when we began this blog, we intended to tell each Westie's backstory right away, but then we got busy with Penny's training and a lot of other things. So this has been a draft for a very long time, but finally is ready to be published! Warning: Lots of photos embedded below.


Click here to see Keli Angel's Puppy Days Flickr Photo Album
Note from Donna:
Keli wants to tell her own story, but before she begins, here's a little background information . . . our first westie girl was Wyndi, and I wrote about her here. Several months after Wyndi died, we decided to look for a new Westie puppy. I searched online for breeders and contacted several before finding a breeder in Howell, NJ who had a female puppy ready to go.

We went to see her in early May 2002 without really intending to come home with a puppy just yet . . . but who could resist that face? We were the first prospective owners to arrive and after meeting the breeder, and…
Post a Comment
Read more
More posts

Copyright 2008-2020, D. L. Wolf. All Rights Reserved for all written material and original photographs. Please ask permission before sharing any information or photographs from Keli's Korner~The Westie & The Wauzer. We try to give the proper credit to others whenever possible, but if we omit a link, please email us at sewamazin-at-gmail-dot-com so we can make the necessary corrections. Thank you!